Blue cod is a bottom-dwelling species endemic to New Zealand.  They are found at a depth of up to 150 m and adults tend to vary in average size around the country, with smaller fish in northern regions and larger fish in the colder southern regions.

The Southern Islands fishery is almost entirely a pot fishery. In the past, many blue cod fishers were primarily rock lobster fishers. Therefore, the amount of effort in the blue cod fishery tended to depend on the success of the rock lobster season, with weather conditions in Southland affecting the number of “fishable” days.

The risk assessment covers roughly 87% of all blue cod caught in New Zealand. 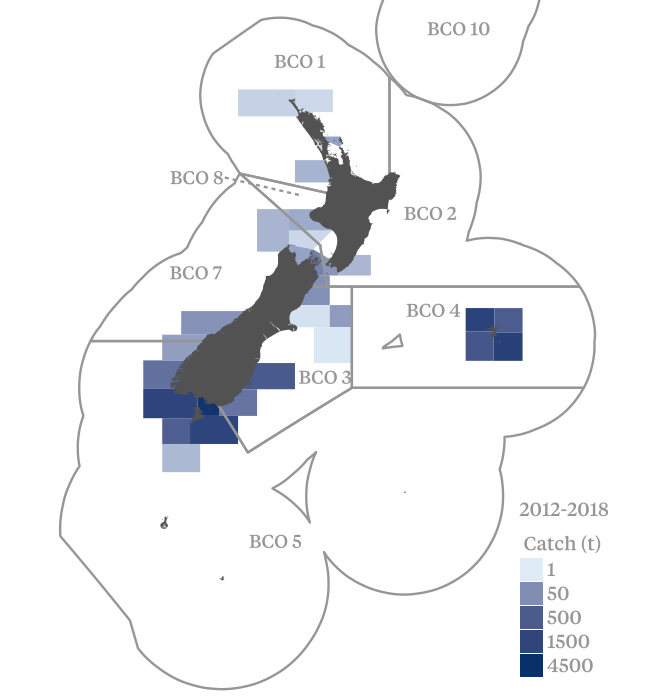 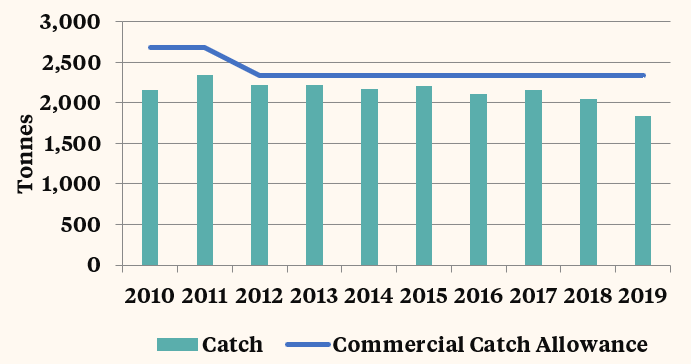 The total allowable commercial catch (TACC) in BCO 4 has remained static since the early 1990s, although catches have generally increased over the same period and have slightly exceeded the TACC in some recent years.  The relative exploitation rate has now declined since 2010–11 and in 2013–14 was below the overfishing threshold (where the proxy measure is based on mean relative exploitation rate for the period 2002–03 to 2013–14). The Ministry for Primary Industries has since concluded that the current catch and TACC are unlikely (< 40%) to cause the stock to decline.  Accordingly, the harvest strategy is expected to achieve stock management objectives.

Within the BCO 5 fishery, stock projections indicate that under the assumptions of commercial catch at the current TACC and recruitment at recent levels the BCO 5 biomass is unlikely to change much over the next 10 years. With catches at the current TACC, the probability of the stock being less than either the soft or hard limit over the next five years is negligible. Given historical TACC adjustments, the harvest strategy appears responsive to the state of the stock and all of the elements work together toward achieving the stock management objectives.

According to landings data, the BCO 4 retained catch is 99% blue cod and 1% “other”. The BCO 5 retained catch is also almost entirely blue cod (97%) with 1% each for conger eel and octopus and 2% for “other”. Information on discards is limited, although the Ministry for Primary Industries reports that there are few significant bycatch problems.

There is limited direct quantitative information on endangered, threatened and protected (ETP) species interactions in the blue cod fisheries, although qualitative information is sufficient to estimate the fishery related mortality and to support measures to mitigate impacts where necessary.  Interactions between the blue cod fisheries and protected seabirds are minimal, albeit not known with precision for some protected species groups (e.g. corals).

The main impacts of the fishery on the ecosystem elements can be inferred from the stock assessments, QMS catch trends, and observer data that cover the target species, related species, and most levels of the ecosystem. The lack of significant levels of retained and discarded by-catch, limited ETP interactions and potentially limited benthic impacts indicate a limited ecosystem impact.

The Fisheries Act 1996 (the Act) and subsequent amendments provide a binding legislative and legal framework for delivering the objectives of Components 1 and 2.  Sections 10, 11, and 12 of the Act establish the requirements for the decision-making process, and Section 10 further requires the use of the best available information for all decisions. This results in measures and strategies to achieve the fishery-specific objectives. The Act requirement for best available information leads to scientific evaluation in advance of decisions. The Act further requires consultation with such persons or organisations as the Minister considers are representative of those classes of persons having an interest in the stock or the effects of fishing on the aquatic environment in the area concerned including Maori, environmental, commercial, and recreational interests.

While objectives broadly consistent with Components 1 and 2 are specified in the Act and Fisheries 2030, and are therefore implicit in the fishery specific management system, it is not clear that explicit short and long-term objectives for blue cod fisheries are in place at this stage.  A National Blue Cod Strategy is currently under development by the Ministry for Primary Industries and may result in fishery specific objectives.