The New Zealand orange roughy fishery is a well managed and sustainable fishery in accordance with the Marine Stewardship Council's Principles and Criteria for Sustainable Fishing.

New Zealand has the largest and longest-standing orange roughy fishery in the world. It operates in four main areas: off New Zealand’s northern North Island (ORH 1), Cape Runaway to Banks Peninsula (ORH 2A, 2B & 3A), Chatham Rise (ORH 3B) and the Challenger Plateau (ORH 7A). Orange roughy fishing in New Zealand takes place over areas of flat seabed on the continental slope and on seamounts, knolls, and hills.

Orange roughy is managed by Fisheries New Zealand (FNZ) using the Quota Management System (QMS). FNZ works in partnership with Deepwater Group (a not for profit organisation that works on behalf of fisheries quota owners). The two parties have developed a single joint-management framework with agreed strategic and operational priorities and workplans. The partnership is focused on determining the maximum economic yield of the deepwater fisheries by setting catch limits that maximise returns over the long-term within the constraints of ecological sustainability. 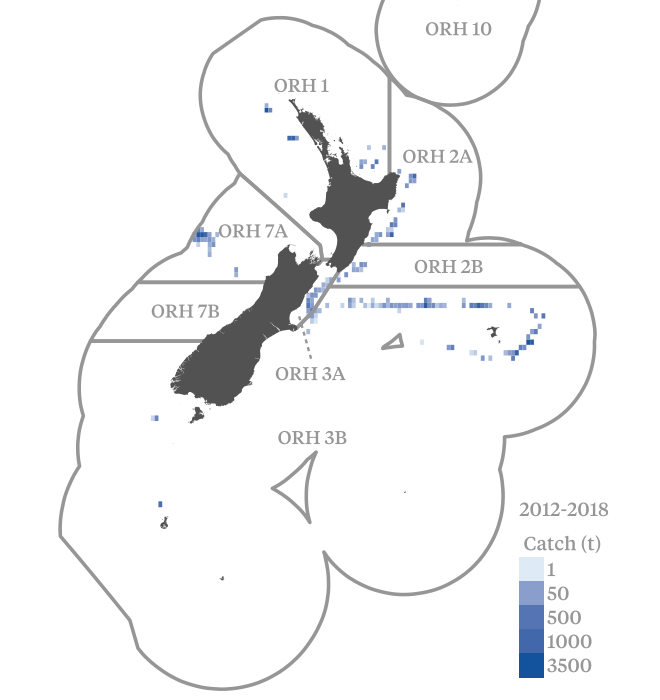 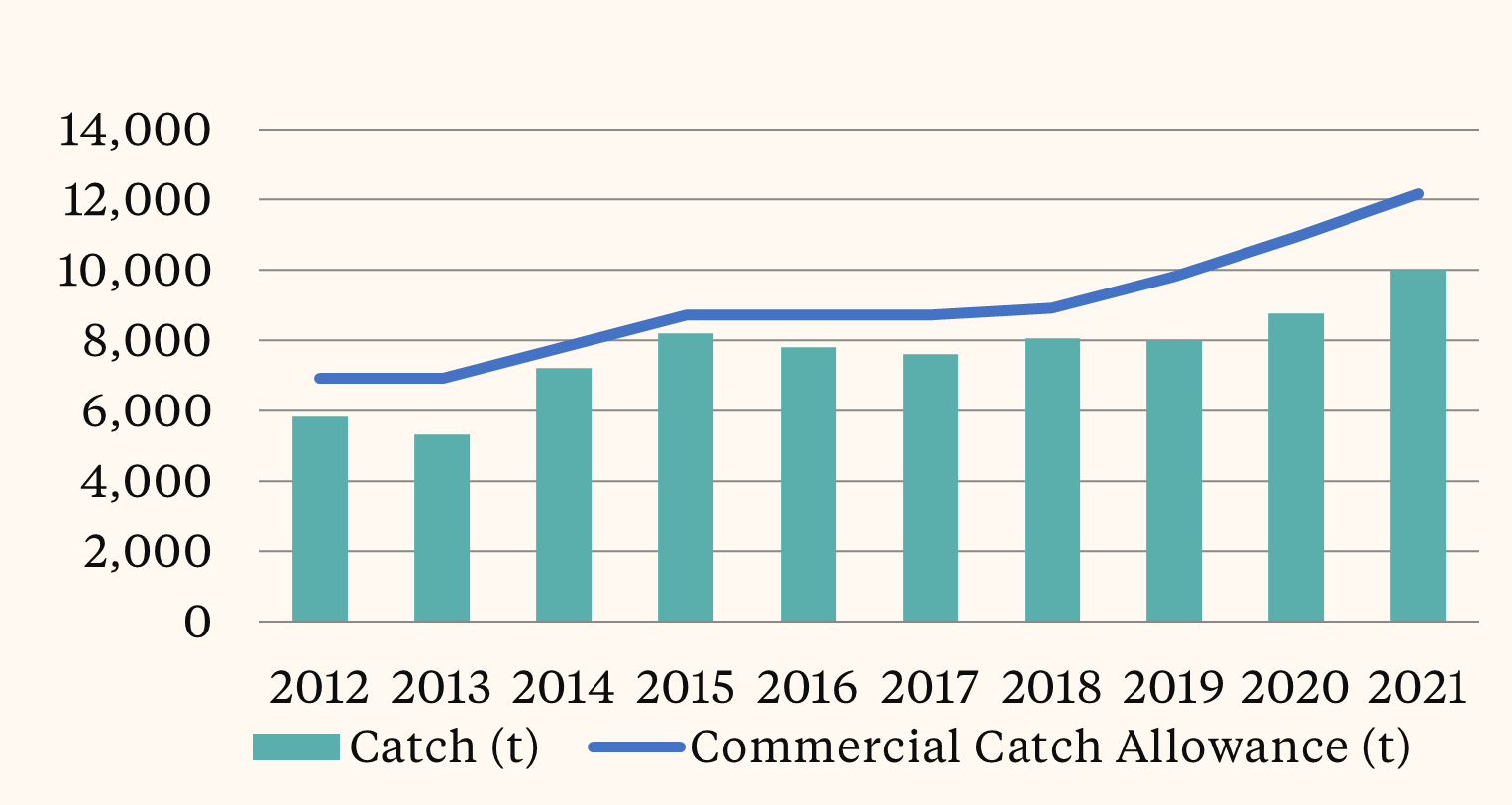 The MSC assessment stated the fishery is exceptionally well managed and is characterized by state of the art stock assessments and harvest strategies. In previous years, all three orange roughy stocks had dropped well below the current target range of 30-50% of unfished biomass but have increased in abundance since the 1990s or 2000s. The stocks of NWCR and ORH 7A are in good condition and within the target range. The stock of ESCR has increased to the bottom of the target range.

Assessments of orange roughy stocks based on fitting population dynamics models have been conducted for many years. However, it has proved challenging to conduct assessments that are not subject to considerable uncertainty for a variety of reasons. In 2014, stock assessments based on fitting population dynamics models were approved for the first time in many years by the Deepwater Fisheries Assessment Working Group (DFAWG), which consists of scientists from the National Institute of Water and Atmospheric Research (NIWA), the Ministry for Primary Industries, representatives of environmental NGOs, and industry.

The assessment stated New Zealand implements high levels of control over the fisheries to minimise environmental impacts. The fisheries have a high degree of certainty to be within limits of national and international requirements for all endangered, threatened, and protected (ETP) elements. However, the fishery occurs in regions with deepwater corals and there remains some uncertainty about the risk of serious or irreversible harm to ETP coral species in particular areas.

An assessment has been undertaken of the orange roughy trawl footprint in relation to protected coral species distribution in New Zealand waters in which observed and predicted distributions of protected corals were overlain on the orange roughy trawl footprint. Three percent of the known UTF habitat in the EEZ is estimated to have been trawled. 16% of the available UTF habitat area within the three units of assessment are trawled. For each UTF that has been fished, on average, 51% of the area has been trawled.

Orange roughy fishing vessels in the three orange roughy units of assessment catch relatively few seabirds and no marine mammal captures have been recorded in the ten year period from 2002 to 2012. All orange roughy fishing vessels >28 m are required to comply with regulations that ban the use of net sonde cables and require the deployment of devices to keep birds away from the fishing gear. Industry standards, supported by the Ministry for Primary Industries, require all orange roughy vessels to agree to a Vessel Management Plan that specifies the management of the disposal of fish waste to minimise it as an attractant to seabirds.

Retained bycatch largely consists of species managed within the QMS. Non-retained bycatch account for only a small proportion of the total catch from the orange roughy target fisheries.

The overarching legislation and regulation affecting Principle 1 and Principle 2 are highly developed, and applied specifically to the orange roughy fisheries.

The management system for orange roughy has an effective monitoring, control and surveillance system, including satellite vessel monitoring systems, government observers, and accurate reporting and record-keeping. Sanctions to deal with non-compliance in the fishery exist, and are consistently applied. However, the preferred approach is to work collaboratively with industry to prevent non-compliance.

The National Fisheries Plan for Deepwater has specific objectives for orange roughy that directly guide actions in the fishery. These are specified in the Annual Operating Plan and progress is reported in the Annual Review Report. Clear long-term objectives that guide decision making, consistent with MSC Principles and Criteria and a precautionary approach, are explicit within and required by management policy.

The orange roughy fishery has been managed within the QMS since its inception in 1986.

By the 4th annual audit in 2026 there will be some quantitative evidence that the partial strategy outlined in the DWG benthic operational procedures is being implemented successfully in the NWCR and ESCR units of assessment.

Changes identified by the most recent assessment
The latest Public Certification Report (PCR), for the New Zealand orange roughy fishery reassessment against the MSC Fisheries Standard, is a “reduced” reassessment, for which the fishery is eligible because there were no conditions open following the completion of the third surveillance audit of the current certificate. The determination of the assessment team at this Public Certification Report stage is that the fishery meets the MSC fishery standard and should remain certified. MRAG Americas has determined on this basis that the fishery shall be recertified. MRAG Americas has determined that this fishery meets the MSC Fishery Standard v 2.01, and no objections were received. The fishery shall be recertified.  The changes since the previous assessment are summarised below.

Principle 1: Monitoring of abundance and age-structure has continued since the previous full assessment at the expected rate, although surveys were delayed owing to COVID. Estimates of stock status have increased for the ORH3B ECSR and ORH7A units while stock status remains at largely unchanged for the ORH3B NWFSC unit. Stock biomass is in the management target range for all units. The harvest control rule continues to be applied and feed into the management process, with total allowable commercial catch (TACCs) at or below those from the harvest control rule (HCR). Industry has agreed to implement a catch limit that is the lower of the output of the HCR and catch limit agreed by the Minister as a precautionary measure.

Principle 2: Since the previous full assessment, substantial advancements have been made in habitat suitability modelling and predicted and observed coral and sponge habitat distribution. To complement this, there have also been improvements in the precision with which trawl footprint within the unit of assessment (UoA) areas is measured, and new benthic operational procedures implemented by Deepwater Group Limited (DWG) are improving information on coral captures on a fine scale, enabling adaptive management of areas trawled on Underwater Topographic Features (UTFs) and the slope. Interactions with endangered, threatened, or protected species (ETP) such as birds and mammals remains low, and management strategies for these animals remain in place and effective.

Principle 3: Management of the orange roughy fisheries continued the strong management regime described in the previous full assessment. Improvements since the previous assessment include implementation of digital monitoring, which provides Ministry for Primary Industries (MPI) with daily access to data, greater opportunity to target compliance risk, and as a consequence further reduces the potential for unreported catch and area misreporting. Allegations of harassment and bullying of observers led to a review of claims, and resulted in new procedures by Fisheries New Zealand (FNZ) and DWG to prevent harassment and bullying. Several incursions of fishing vessels into closed areas were determined as inadvertent, and the companies obtained from MPI the precise coordinates of the closed areas, installed the coordinates on navigation systems, and established alerts to prevent future incursions. Emphasis on compliance with environmental regulations resulted in establishment of an Environmental Liaison Officer by DWG to liaise with the industry and increasing awareness of the regulations and the procedures set by DWG to comply with them.

Click the button above to download the orange roughy factsheet which collates relevant information from across the site into a single PDF. The professionally designed format makes it easy to share soft copies and print hard copies.